Lessons learned from a film festival 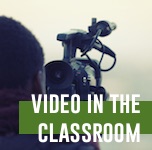 Every year, I watch in awe as students take ownership of their films and are challenged to exercise new skills and proficiencies: self direction, creative expression, and problem-solving. I’ve seen this assignment throw some of our most academically-capable and motivated students off-balance.

This may be the most challenging course we offer.

Lots of learning going on, none of it in seats.

Today I watched my 11th and 12th grade students in our common room during the last block of the day. Class looked like this:

Welcome to filmmaking at the Compass School

A full 13 years ago, Compass School pulled off its first film festival, with four or five original, student-written and student-produced films, shown to the public and “judged” by a local guest filmmaker. It was the culminating event for our first interdisciplinary filmmaking course for 11th and 12th graders.

The films reflected our low budget equipment and amateur filmmakers, but there was a buzz during the event that results when students’ hard work and original stories are shared with and enjoyed by a public audience. Since then, I have offered this six-week course each spring, taught in tandem with a science/technology teacher.

One of the challenges involves time.

The course runs for only six or seven weeks, and the groups of 3 or 4 students each make two short films in that time, so they are forced to work creatively and collaboratively on a deadline — a  great skill to practice.

My colleague teaches a single lesson on camera basics in the first week (this year, the first day) of class before students are thrown into groups. Each group has the task of creating an original two to four-minute silent film. They’re trying out the idea of telling a solely visual story.

As students work, I squeeze in a lesson on what makes a good story. I usually also spend a class helping them generate ideas for their screenplays. For this, I’ve tried several strategies, including bringing in objects (or just a selection of shoes) that I ask them to examine and then create a plot or character around.

We also look at films as texts.

We examine various scenes from feature and short films in class, and they watch and write analytically about films as homework. It’s full immersion because both their science and humanities classes are now one class.

As they’re in the midst of the screenplay writing process, they’re simultaneously thrown into camera work, including the creation of their silent films. Then, three weeks into the course, they pitch their scripts and quickly begin to cast and seek locations with their four-member production crews.

In the final weeks, they’re in full production mode.

They’ve chosen several of each other’s scripts to produce, and they are tasked with all elements of the filmmaking process, including casting, finding locations, creating storyboards and a shot list (with a schedule), shooting, and editing. 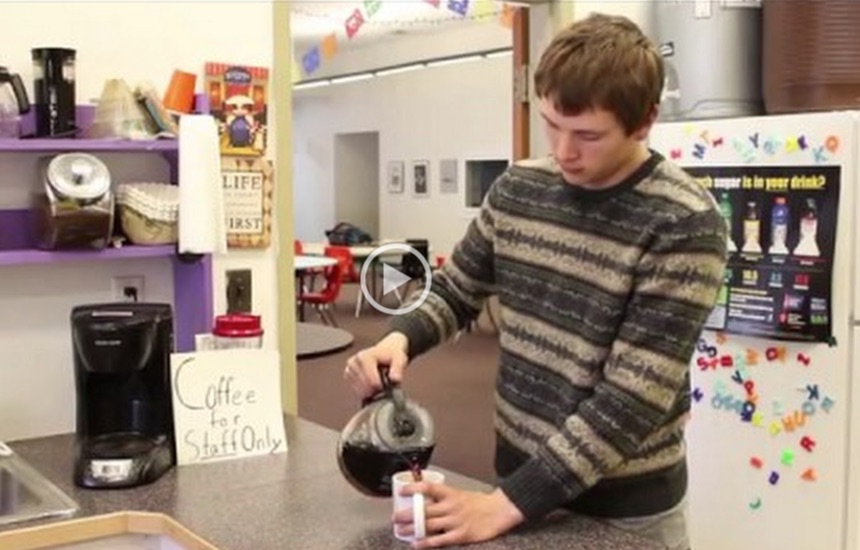 Like in any course, different students are challenged by different elements, but in their final reflections, most students point to the hardest thing of all: organization.

To produce a film, students need to constantly think ahead, create (and revise) a schedule that involves multiple people (including outside community members who sometimes serve as actors), and deal with forces beyond their control, including snowstorms and sick actors. If they don’t have someone in their group who naturally keeps track of costumes, props, and details like microphone batteries, they quickly learn the need for one.

A student who took the course in his junior and senior years reflected on the important lesson of organization and planning:

“One of the biggest differences I made this year was being organized.”

Last year I was somewhat scattered on what we were doing and was making up the schedule as we went along. I would frequently pull students outside of class, begging teachers to let me shoot in their room and more than once lie, cheat and steal to get what I wanted…

This year I’ve found that making a calendar has been such a huge help! I wished that I had done this the year before as it made the filming so much easier.”

The quality of this student’s film in the second year reflected enormous growth, and he credited much of this to his improved organizational skills.

Students also need to immerse themselves in the messy creative process with peers who they didn’t necessarily choose to work with.

Many schools are paying more attention to teaching the “soft skill” of collaboration, but we are challenged by how to teach and assess this crucial skill. 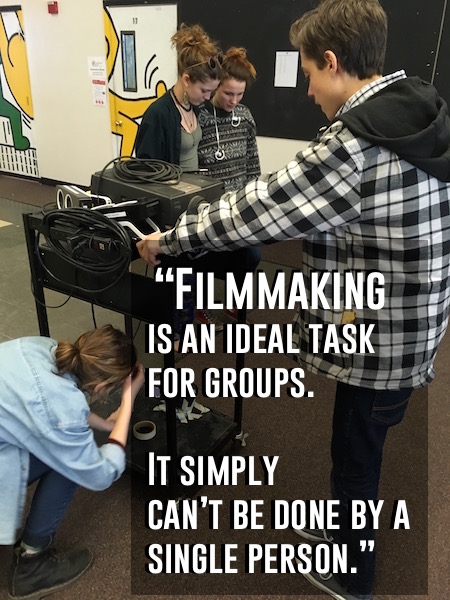 I find that filmmaking is an ideal task for groups because it simply can’t be done by a single person. You need your peers, and you need to figure out how to use each other’s strengths. It provides my co-teacher and I with the opportunity to describe what strong collaboration looks like, and it throws students into learning by doing.

This student’s advice to future Compass filmmaking students touches on just one element of healthy collaboration:

“Listen and… make sure that you get everyone’s advice as this is an “our” film, not a “your” film. Whether it’s staging a shot or choosing music, everyone should be heard because each of them has an idea and it could be just as good as yours.”

Finally, one of the keys to success is our public exhibition of the films.

The public venue, in the evening, even if it’s just at our little school, raises the stakes.

It’s a festive event that present and former students and families enjoy coming to. I also invite two or more local filmmakers to act as judges, and they provide verbal (public) critical feedback and praise to the students after the viewing. This year, one of our esteemed judges includes one of my former filmmaking students who has gone on to work in the film/TV industry.

Pre-YouTube days, one of the student tasks was to create a DVD of all of the films to be sold at the festival. I’ve found that using these past films in class is a crucial aspect of modeling student work; it helps both to raise the standards each year but also to inspire and to remind them that it can be done.

The film festival has become an annual event that has even been described as a rite of passage. The filmmaking process calls on many of the skills we’ve asked of students throughout their high school career, including:

The popcorn and M&Ms help, but there is nothing quite as satisfying as witnessing the students’ pride and gratification at seeing their stories come to fruition on screen, with a rapt and appreciative audience.

The beauty of the course is that students are at the center of the work, and they take complete ownership. 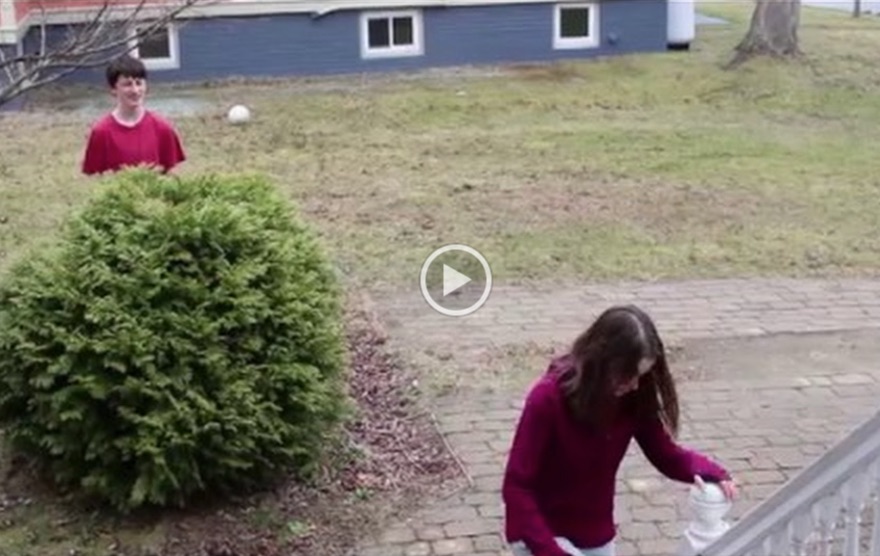 In the end, my co-teacher and I merely stand behind them (or sometimes in front of the camera), push them a little, and provide some guidance as needed; our role is as coaches rather than the teacher. They are the leaders, the producers, the problem solvers, and the artists. 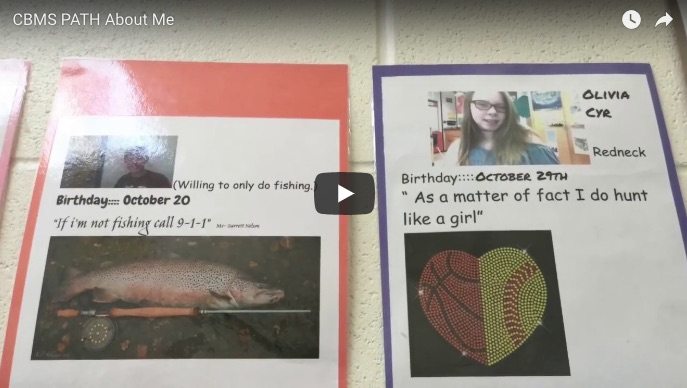 Screencasting for a student-led conference 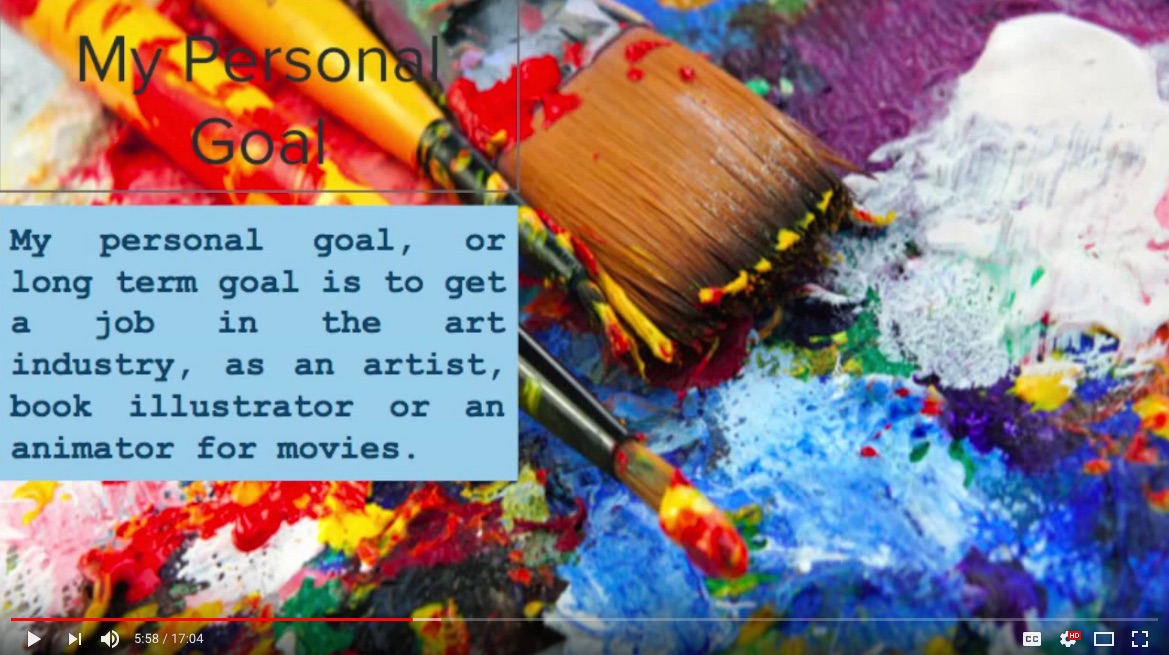 Student-led conferences and engagement in PLPs

Julia Taylor teaches Humanities at Compass School in Westminster VT, where she is also the college counselor and senior adviser.