Sixty dollars, a dremel and a dream

It all started with a post on the iPad Ed Google+ community.

Wait, I take that back.

It really all started with the 20+ iPads we loan out to educators. Those suckers are constantly in demand and constantly in need of charging. They’re each firmly encased in Fintie Kiddie cases, which, laugh all you want, those things can stop a bullet. And they stand up. And they recline, have carrying handles and come in neon colors, perfect for locating 20+ loaned out units during the chaos of an event, but that’s a whole other blog post.

Anyway, we’ve been loaning these iPads out in tote bags, and just tossing the chargers in higgledy-piggledy. Mainly because if you have done any shopping around for charging carts you likely have needed to be resuscitated at least twice when looking at the prices. The cheapest we could find that works with our beloved Fintie cases started at $399.00, and there was no guarantee everything would fit. We’ve borrowed another department’s iPad charging tray a couple times, but a) it cost them closer to $1,000.00, b) weighed close to 25 lbs and c) had no wheels, thus entailing that their tech guy** lug it four blocks each way.

The thing about the Fintie cases is that part of their magic durability is that they surround the iPad in thick molded foam rubber — perfect for tossing in bags and bike panniers (guilty!) but problematic for trying to buy a pre-made charging cart, as the slots in those are generally cut for slimmer, uncased iPads. Plus can we get back to the whole cost thing? Are school districts really running around with so much cash? I know I’m not.

And thus, with no more rambling, I present: How to Build Your Own iPad Charging Cart Out of Office Supplies. 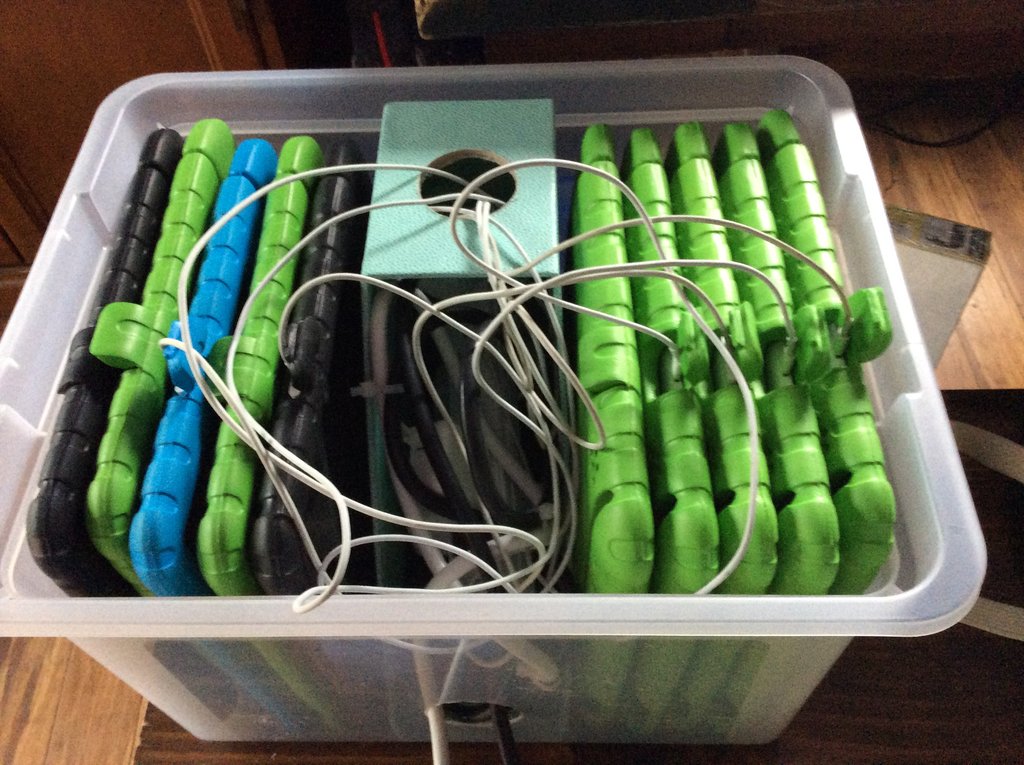 Stand well back, we are professionals

The way the whole thing works is by using the hard-sided magazine organizer to hold your surge protectors while simultaneously keeping the iPads snugly against the sides of the tub for transport. With the Finties, we managed to get 10 iPads in, but the resulting weight was a little surprising, so I might make two smaller charging tubs for the remainder of our iPads.

Method: Really the only thing that took methoding was drilling the holes.

You need one hole in the side of the tub to let the cords extend through. It needed to be big enough to admit, in this case, two surge protector cords and the hole saw drill bit cut through that plastic like butter. File the edges of the hole down because I managed to scratch my hand up the first time I tried to pull the cords through.

You also need a hole in the top of the magazine organizer, to pull your iPad cords through, although as you can see, they’re a little frantic-looking, so I think v2.0 will have channels leading away from the hole, so each cord has its own organizing channel. There’s definitely room for refinement here.

Uh, last step: pop the lid on and strap it to the luggage cart.

The small dog shown in the above image is included for scale and cuteness.

His name is Jeffrey.

Things I might do differently in the next version

Anyone else have a great way to build one of these? I’m definitely open to ideas. After all, I’ve still got to find a way to sync them all…

*Yes, TIIE admin Erin and I basically ran round the store measuring things and flinging them in the cart. Loudly. If the store had had an on-site dremel, we would’ve done the whole thing there, filmed it and thrown an after-party with bad 90s electronic music.

What you should know about iPad cases

What We're Reading: iPad management in the classroom

How to make a pop-up video