If you build it, they will charge

Not all of our iPads get checked out at once, and, as a result of testing different cases* not all of our iPads take up the same amount of room in a conventional charging tray. And almost as a sidenote, those trays start around $200 for a 10-slot box with some cords and  a lid. The solution? DIY!

Based on the success of our 10-iPad charging cart, we decided to make two smaller charging trays, so that folks who wanted to check out only 5 at a time had a convenient and ergonomically successful way to cart their loot around. Oh, and we didn’t want to spend more than $25 to do it. 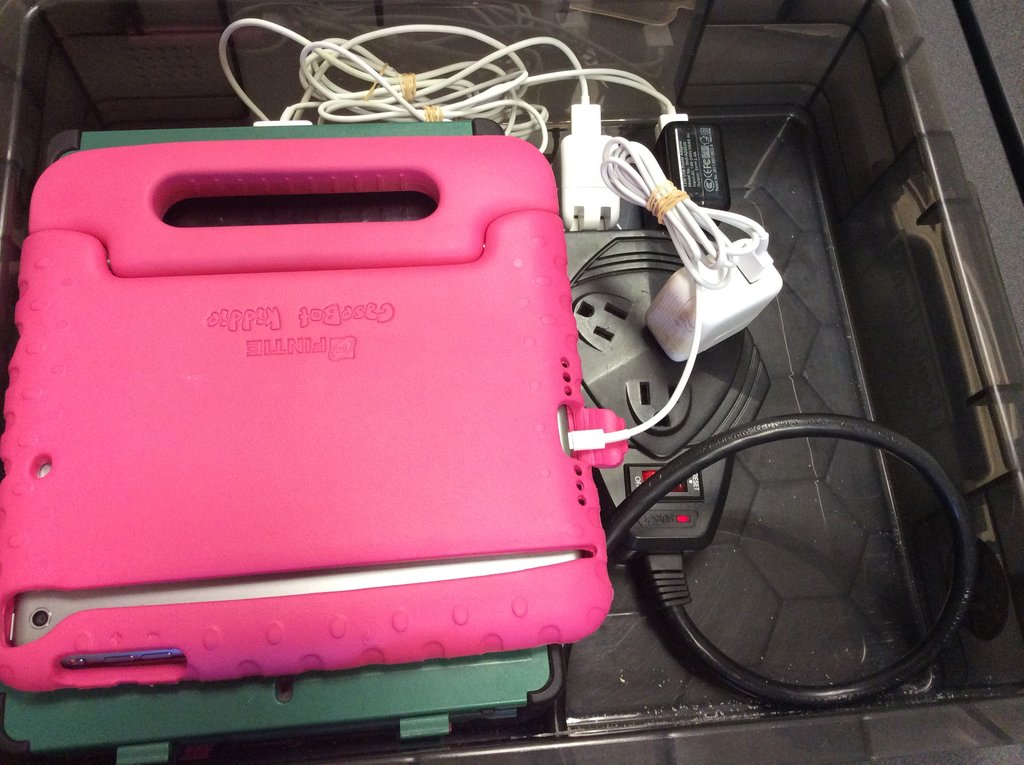 To make a hole in the side of the Really Useful box we used a hole saw:

so that the surge protector’s cord can be plugged into the wall and charging while the lid’s on:

Now, at this point I’m going to confess something important: this setup may not work for you. It works for us because the cases stacked inside this particular Really Useful Box are a Fintie Mini, a Triton Kraken, a CellularVila Combo Case, a Casemate Pop! (don’t ask), and an Amzer Silicone Jelly case. This box worked for us, mainly because the Fellows surge protector lets you plug many chargers in at odd angle, making it the number one tool for the job and justifying us going over our budget (whoops).

But I don’t know which cases you have on your iPads. I just know that it took me less than a half hour to rig these puppies up and they’re very, very useful. So if I can do it, you can totally do it too, and save yourself hundreds of dollars. The key here, as with so much of the best ideas coming out of schools these days, is to roll your sleeves up and make it yourselves.

*So many cases. Like, a year’s worth of different cases. Most of them** performed decently in terms of protection, but fell down on the function side, until we found our One True Case. But that’s another entry…

**I’m not even gonna talk about the iBallz. Nope. Not going there.

Build your own iPad charging cart out of office supplies

What you should know about iPad cases

What We're Reading: iPad management in the classroom

How to make a pop-up video